Where to Buy
Menu 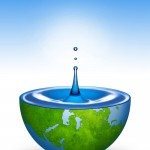 World Water Day is observed on March 22 every year.  This day is held to bring attention to the importance of the earth’s most precious natural resource.  Many take freshwater for granted but many cannot.  Think about how many things we do in our daily life that revolves around water, not just water for drinking but cleaning, food production, transportation, power generation, worship, recreation, fire fighting, the list goes on.  Twenty years ago World Water Day was proposed at the United Nation Conference on Environment and Development as they thought about the importance of water.  Below are some interesting facts you may not know as you keep water in mind today.

The water and sanitation crisis claims more lives through disease than any war claims through guns.1

An American taking a five-minute shower uses more water than a typical person in a developing country slum uses in a whole day. 1